Trunk-based development can be scary for developers and product owners; changes to the code base are deployed to live and, if a feature is not ready for release, how do we control the release of a new feature or hide a feature still in development?

If you are unaware of feature toggles then this Pete Hodgson article on feature toggles is a good place to start. For more details on trunk based development, see this Martin Fowler article.

Feature toggles are – on the whole – used exclusively at the UI layer to either:

Feature toggles are generally not used elsewhere in the stack, the UI is our point of contact with the end user and it’s clear that any entry points into a feature still under development need to be hidden there. Code in the API and micro services layer is typically not controlled via toggles because it is far easier to hide to the code changes deeper within the stack. We could use them, it’s just that generally we don’t need to worry for feature development.

After a lot of internal discussion, including debates on whether we should develop our own feature toggle service, we eventually decided upon a SaaS called LaunchDarkly. It fits nicely into our technology stack, ticks a number of boxes from our shopping list including an API endpoint to allow us to build automated tools in order to manage our feature toggles. It also has a number of SDKs available, including a Node JS SDK and a client-side JavaScript SDK.

Our web application is built using React and GraphQL/Relay. The LaunchDarkly JavaScript SDK client is embedded in the page allowing each component the ability to query LaunchDarkly for a feature toggle state. In reality, components rarely interact with the LaunchDarkly client but instead interact with a module which wraps the JavaScript client and provides an easy method of displaying a component based upon the value of a toggle.

First, we bring in a module that wraps the LaunchDarkly JavaScript SDK client to avoid components having a dependency on LaunchDarkly.

The toggler module is pretty straightforward. Here it is in it’s entirety:

Next, we create our two buttons which are pretty similar except for the navigation address:

We use the imported toggleAB to determine which component to render, depending on the state of the ‘new-registration’ feature toggle. If the flag is true then the newRegButton is returned, otherwise the existingRegButton is used.

Finally, inside the render function, render the returned RegistrationButton component:

That is essentially it from the React side of things. When the web application is running on our servers the application knows the environment it’s running under and configures the LaunchDarkly JavaScript client accordingly. So, when running under the integration environment, the LaunchDarkly client is configured for integration and gets the state of the new registration feature flag for the integration environment. In our example, the state is set to on and so the newRegButton is rendered. Similarly, when running under the production servers the client is configured accordingly and the request for the state of the feature toggle from the production environment is returned. For production users, the existingRegButton is returned and the end user is directed to the existing registration page.

Once a feature is complete we can configure the feature toggle on the production environment to set the state to on (in which case all end users will see the new page) or we canary release and roll out the feature to a certain percentage of users – say 20% get a feature toggle state of on while the remaining 80% get a state of off. We can do all of this via the LaunchDarkly UI (or even programmatically via the LaunchDarkly API) without any React code changes or even a re-deployment of the code. Making a feature live to our end users is as simple as flipping a switch on the LaunchDarkly UI and that state change is reflected immediately on our web application.

The toggleAB function we use in the react page can also be used for A/B experiments. Instead of having a button navigate to a different page, we might want to run an experiment on the colour of a button, or the text displayed in the button. (E.g.: does the text Register for free drive more users to register than Register here?) LaunchDarkly has functionality to set goals and assign those goals against the feature toggles. The JavaScript client can UI interactions (such as element clicks) and sends events to LaunchDarkly when a goal has been met (e.g.: A button has been clicked). LaunchDarkly tracks page impressions, element clicks, etc and provides statistics on how many users clicked the button when the feature flag is on or off.

One of the criticisms with using feature toggles is that the base code gets covered in feature flag calls that are never tidied up. We could also end up with a lot of feature flags that end up never being removed since developers aren’t sure if these flags are safe to remove. The end result is a mess of code that is difficult to maintain.

One of the concerns from the engineers around feature toggling is the performance of the 3rd party service. How does this affect page load speeds and execution times? Will the requests for feature toggle slow down code execution speed?

These are valid concerns – waiting on a 3rd party SaaS is time consuming and potentially brittle. What happens if the 3rd party site is unavailable? Slow network latency? Helpfully, LaunchDarkly has been designed to be fast and resilient – it even works if the LaunchDarkly website is unavailable. (See the LaunchDarkly FAQ for more details on performance.) Performance of feature toggle request is fast - all toggle states are cached within the client so no remote requests are required to get the feature toggle state. Updates to the state of the toggle (for a user) are streamed from the LaunchDarkly servers to the client using server-sent events. This means that, provided we have a network connection, changes to the feature flag state set via the LaunchDarkly UI are reflected almost immediately in the JavaScript client.

However, how do the feature toggle states get into the JavaScript client in the first place? As part of the page load we need to initialise the LaunchDarkly client and that does involve a remote call to LaunchDarkly. In fact, we need to wait for the client to emit the on(‘ready’) event before we can start to ask for feature toggle states. This can slow down the page load speed considerably (LaunchDarkly docs suggest 100ms or more latency here). The React component cannot render the page until the client is initialised, but a 100ms latency wasn’t acceptable.

We solved this problem using GraphQL/Relay and another microservice named Flipper. The diagram below shows the solution: 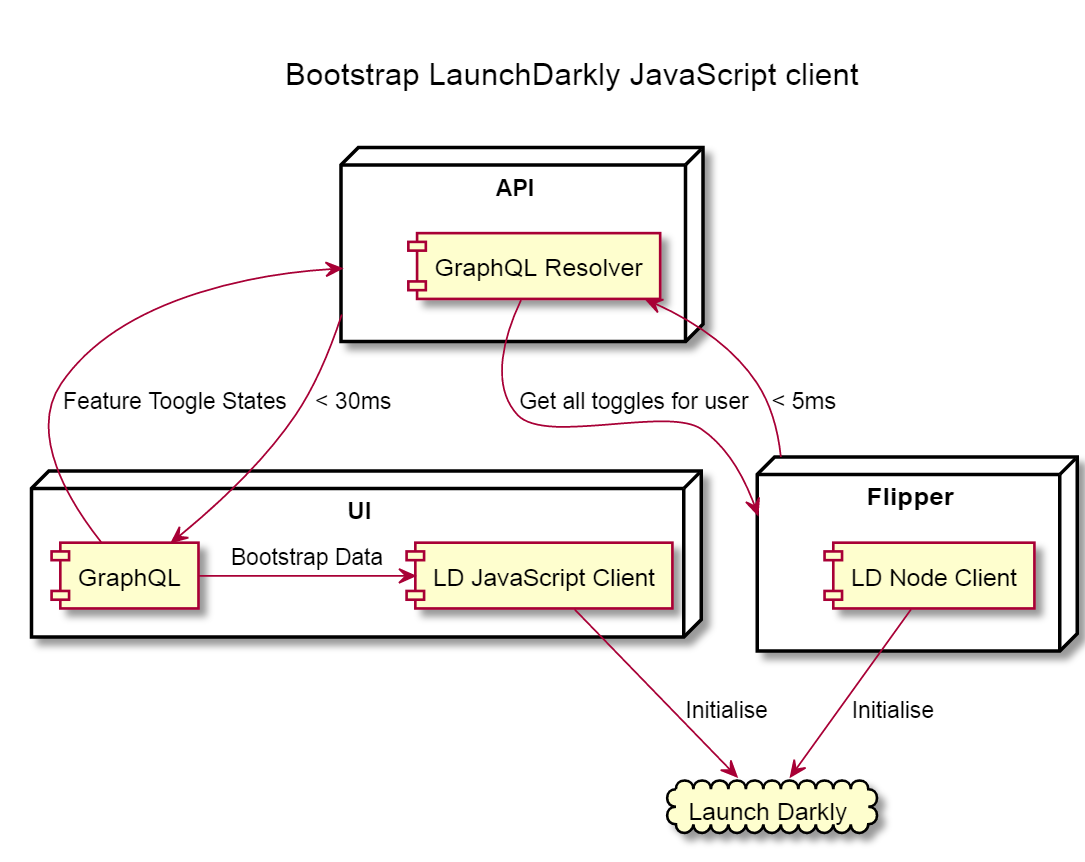 So, that’s how feature toggling is performed at FMP. We would love to hear from you on how you have solved the problem of continuous delivery and trunk based development.