Findmypast and its sister site; the British Newspaper Archive (BNA), are served by a web of microservices operating across multiple Kubernetes clusters. A number of our microservices rely upon a back-end database, and although we do operate other database technologies (MSSQL, MongoDB etc.), Postgres is our de-facto standard for relational databases.

When the DevOps team first realised the need to upgrade all of the database nodes to the latest Postgres version, we operated a total of twelve production Postgres databases, each running on their own dedicated Ubuntu Linux virtual machine (VM). Running on standalone VMs allows for separation of concerns, and limits the ‘blast radius’ of issues and failures should they occur. All VMs are managed by our Hyper-V cluster, and backed up regularly by Veeam. In addition to this backup method we operate Barman, which takes a full backup of all production Postgres database hosts nightly, and continuously receives WAL (Write Ahead Log) updates.

We operate a a similar number of staging / integration / utility Postgres databases. Unlike the production databases these are (mostly) co-located on a single host, given the reduced storage and performance requirements of these databases.

We manage Postgres installations and configuration through Puppet, pinning the installed version of Postgres. After the initial deployment we were not actively upgrading the Postgres version running on the hosts. Upgrades of the production databases were instead only undertaken by the feature teams (those teams that manage our micro-services), or by us when requested by the feature teams. This meant that we had a variety of Postgres databases deployed to production, between versions 9 and 14 (the latest supported version at the time). It also meant that the Production Postgres versions differed from their respective staging / integration database. We knew this situation, as well as the approach to upgrades was bad practice, and wanted to reset by normalising all Postgres database deployments to the latest supported version.

We understood that upgrading all database hosts to the latest Postgres version would bring with it several benefits:

Preparing for the Production Upgrades

In early July 2022 we set about identifying if there were blockers to upgrading any of the twelve production databases to Postgres 14. We reviewed the release notes for each major release since 9.5, and were able to identify that there were no deprecation / configuration changes that affected our Postgres database deployments. We put this to the test by upgrading the Postgres version of the staging database host from 11 to 14, meaning all databases on this host would be instantly migrated to the latest version of Postgres. We left this to “bed in” for some time, which proved to us and importantly the feature teams, that all micro-services that utilised a Postgres database could function with Postgres 14.

However, as the staging databases sizes were small (~100-500MB), the data stored in them could be re-generated on-demand or discarded. Therefore, the upgrade / switchover was a simple and near immediate change. We knew that this approach would not be applicable for our production databases given their size, the need to limit downtime, and of course the need maintain customer data. Therefore we went to work planning the upgrade process in detail.

Having identified that all microservices that utilised a database could operate with a Postgres 14 database, we went about planning the work that would be involved to upgrade. We knew that we wanted to get this work done as quickly as possible, due to the fact that we had de-prioritised this work for some time. As we work within a team practising an agile methodology with regular refinement sessions, the planning of how were going to tackle this did not take long, and by the end of July 2022 we had an epic and plan that broke down as follows:

Having planned out the stories, and refined them as a team, we surmised that we could complete the entire epic of work within a single three month quarter. We scheduled this to occur pretty much immediately during the upcoming quarter, between August and October 2022.

Identifying how we would need to upgrade each production database was the first major task we needed to complete. Given that we were running a variety of Postgres database versions between 9.5 and 13.1, we were aware that there may be specific procedures necessary to move between versions, in order to maintain data integrity and limit downtime.

Each approach had drawbacks, benefits and limitations. For instance the first approach, incurred very little downtime, but would only be an option for Postgres databases that supported WAL publication. The second two options, would incur downtime dependant on the size of the underlying database, but was an option regardless of the database Postgres version.

Despite the differences each approach shared common features:

In practice, the existing Postgres version, and the need to limit downtime for the majority of production services, were the most limiting factors when choosing the approach for upgrading the databases.

In total we upgraded eleven production databases from various Postgres versions up to version 14. Six were upgraded from Postgres 9.5, four from version 11, and one from version 13.1. One database was identified as no longer required, and the host was shut down. We completed all upgrades in just over six weeks (three sprint cycles), picking them up as and when time allowed alongside a number of other work streams, as well as on-boarding several new members of the DevOps team. 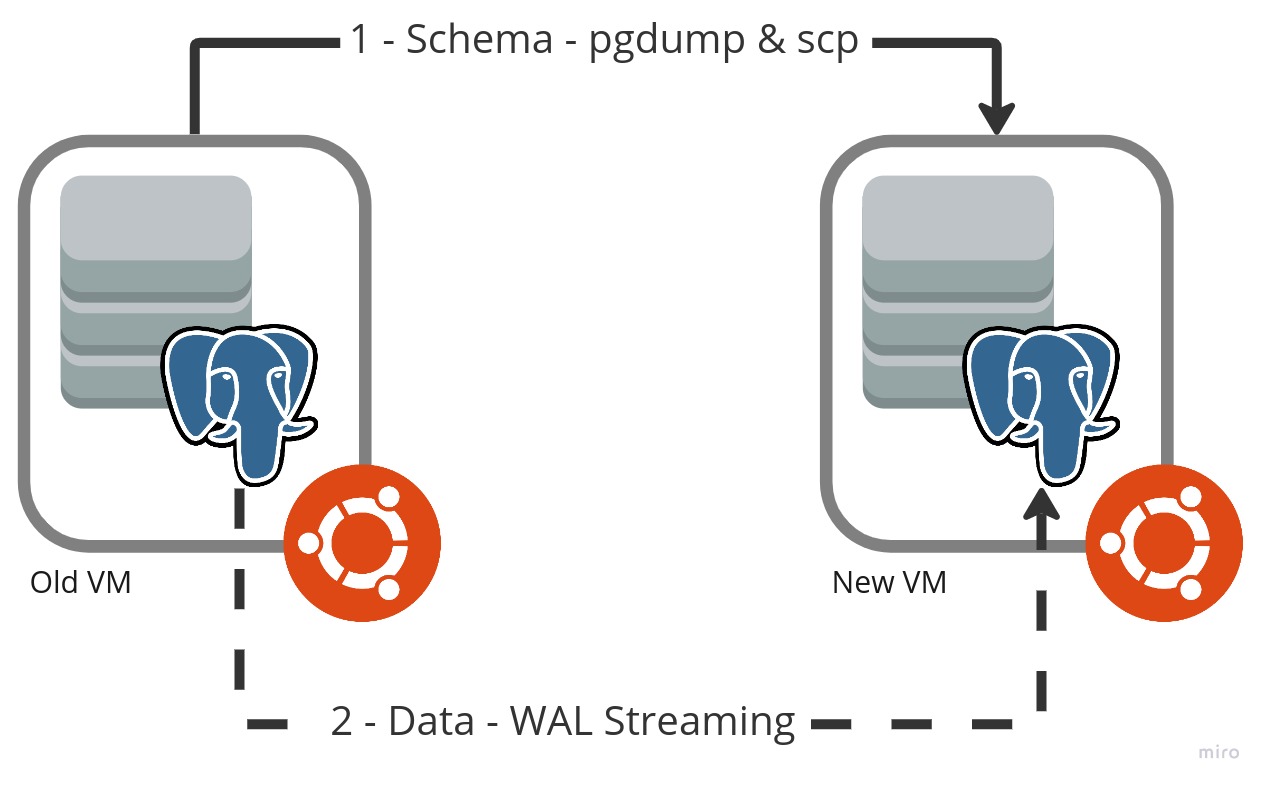 For the larger databases the WAL replication took in the order to two-to-three days to complete, as we were bottlenecked by the hardware to ~10MB/s transfer speeds between database hosts, which was acceptable, if not a little frustrating at times. The subscription and replication added practically no overheads on the database hosts, and it was easy to monitor through both psql commands and Grafana (see example below):

However it was with this method that we faced the largest number of issues, relating both to our processes and inherent behaviours / shortcomings in the tools and commands used:

We did have to restart the replication a couple of times when above issues were identified, though thankfully no incidents occurred due to these issues. All gotcha’s and workarounds were documented within our upgrade playbook and troubleshooting guides for future reference. Later upgrades were much smoother thanks to this feedback loop.

The only issue encountered with the in-place upgrade on an existing host (completed for the Postgres 13 database host), was in relation to the Barman backup configuration. After the upgrade, the Barman backups begun to fail with the error systemid coherence: FAILED (the system Id of the connected PostgreSQL server changed, stored in "/var/lib/barman/<BACKUP_HOST>/identity.json") surfacing. As the error message suggests we had to manually update the target Postgres version within the Barman database, and also clear out any failing WALs in the var/lib/barman/<BACKUP_HOST>/errors/ directory of the Barman backup host.

Upgrading multiple Postgres versions in one go was initially seen as a daunting prospect. Thankfully due to our configuration being deployed by Puppet and our fairly simple Postgres configuration, we did not hit any major issues or blockers. Those issues we did encounter were resolvable, and the breadth of the workarounds did not require us to vastly change our initial approach.

At the epic’s inception we were not aware of the limitations (e.g. not transferring database level privileges (bug report)) of the pgdump and pgdumpall commands in earlier Postgres versions, and now have a greater appreciation of how and when specific options should be used.

Similarly, the increased focus on our Postgres environment enabled us to engage with feature teams regarding their ownership of databases. As a result database hosts that were no longer being used by production services could be dropped.

It gave us a better insight in to Barman, our Postgres backup solution, and gave us the time and space to improve our knowledge around this. This has lead us to plan future work to:

We also identified several shortcomings with our processes in relation to managing and provisioning Postgres databases, and we will look to make the following process improvements:

Shorlty after completing the upgrade of all production Postgres databases a new major version (15) was released! We will start to schedule these upgrades for a future quarter, but have already had interest from feature teams to upgrade to this version, due to its ability to support row level filtering in replications.

We hope the above has given you a taste of how the DevOps function at Findmypast operates, the type of work that we undertake, and our approach. We are always looking for engineers to join our team so if you’re interested contact us or check out our current vacancies.