This post uses a graph database to show your family tree to you in a new way and shows you how to query it too. It serves as a basic introduction to Graph Databases and shows what a powerful tool they are.

What are we doing?

At Findmypast we have a team of engineers working on Search. We recently had the chance to use Neo4J (a graph database) to do some interesting work. It’s worth sharing what Graph Dbs are, what they can do, and some of the fun you can have with them.

If you want to play along, there’s a github repo for those in FMP, or a zip file containing everything you need to get started. 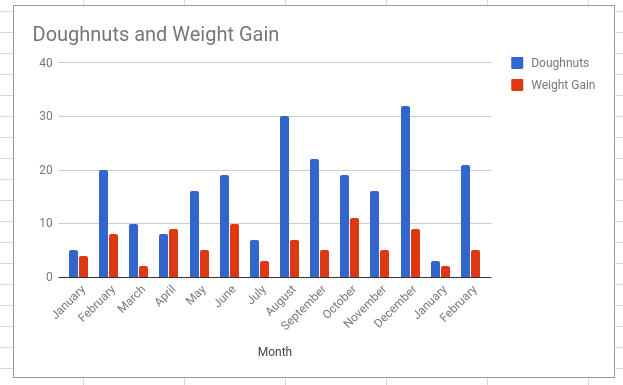 No. This is not a graph. Well, not for the purposes of this blog-post anyway. This is perhaps more technically known as a chart. Charts might have X and Y axes, or segments of pies, or pretty bars and wiggly lines… But these are not GRAPHS. 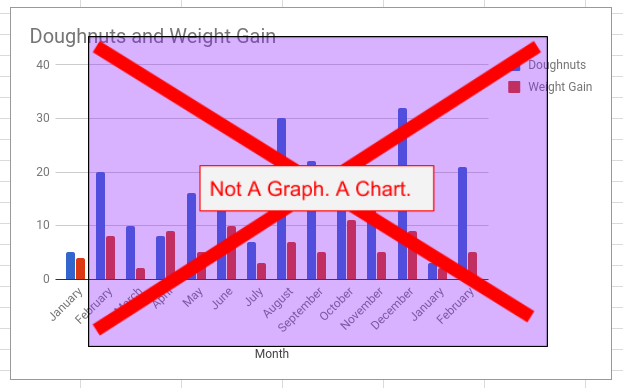 A Graph could be defined as being made up of vertices which are connected by edges. A graph may be undirected, meaning that there is no distinction between the two vertices associated with each edge, or its edges may be directed from one vertex to another.

Fascinating stuff, I’m sure you’ll agree, but let me put that another way.

A graph is a group of nodes connected by relationships.

Back to the story. Getting started.

If you want to try this as well, there are a few hoops to jump through first. If you just want to skip to more pretty pictures, go to the next section. :-)

I think that is everything!

First, you need to convert your gedcom file to a format that can be imported into a graph database. Run this:

My ruby-fu is not great and there could be bugs here with your gedcom. Here be dragons - You have been warned.

That last command will need the path to your tmp folder, not mine…

And it might take a while to run first time.

You should now have an empty graph database waiting for you! Go to the Neo4J database page and you should see something like this: 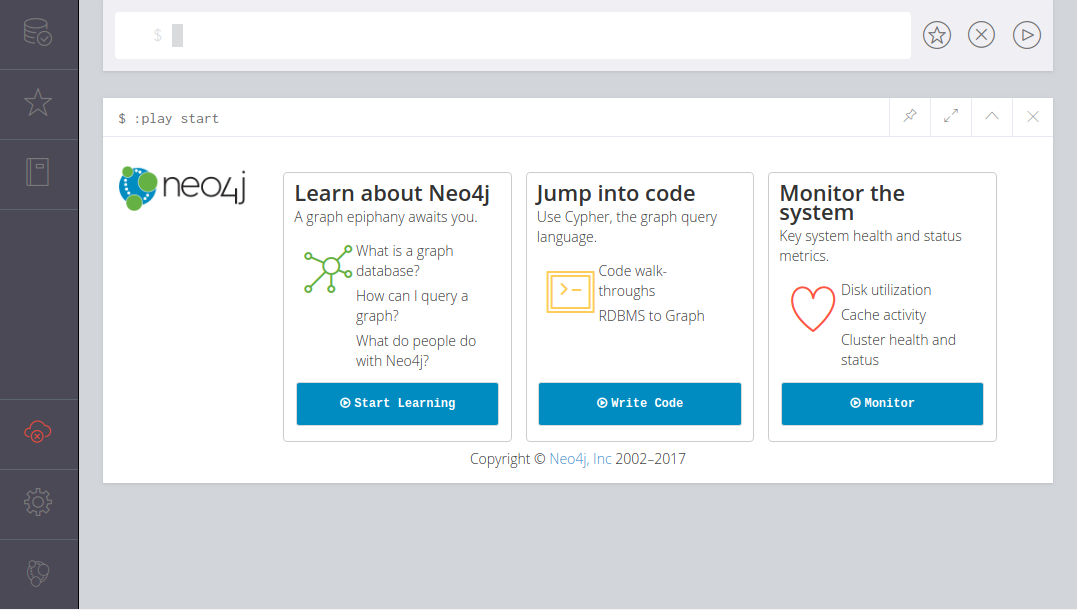 In the input box at the top, paste the following (you’ll find this snippet in Neo4J/neo4jfmp/cypher/import_persons.cyp file along with all the other snippets we’ll run)

and run it. Once that finishes, run this (import_families.cyp):

Now this (create_root.cyp). Change the name to be the root person of the tree (probably you!):

All done! Now you’re ready to do the fun part. But first! Let’s check everything has worked and you can see your tree.

You can click on each node and see its properties at the bottom.

If you don’t like the colours, click on the star icon on the far left of the screen and drag Neo4J/import/gedcom/style.grass onto the dotted box. 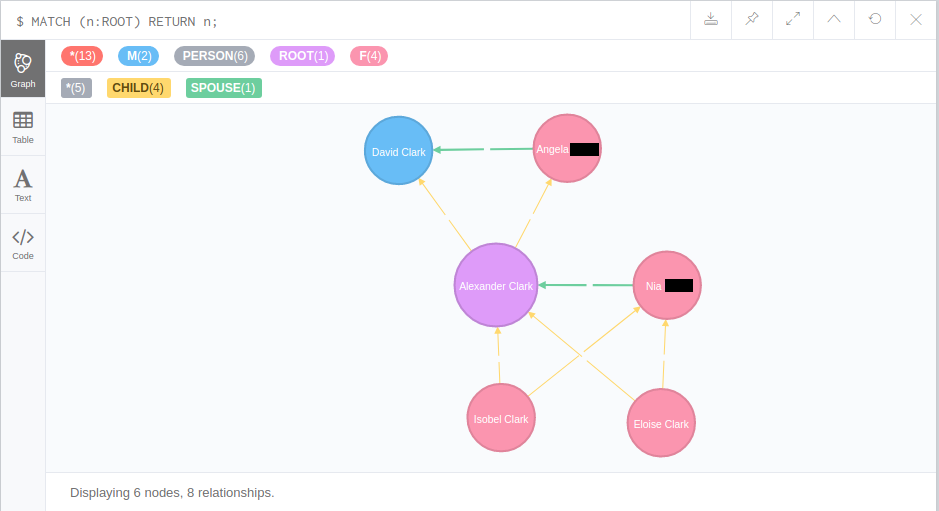 OK. Let’s start with something basic. Like showing everyone in your tree!

Boing! up pops everybody. You can make the window fullscreen with the diagonal arrows in the top right hand corner of the result pane. There’s a zoom bottom right to let you see everyone at once: 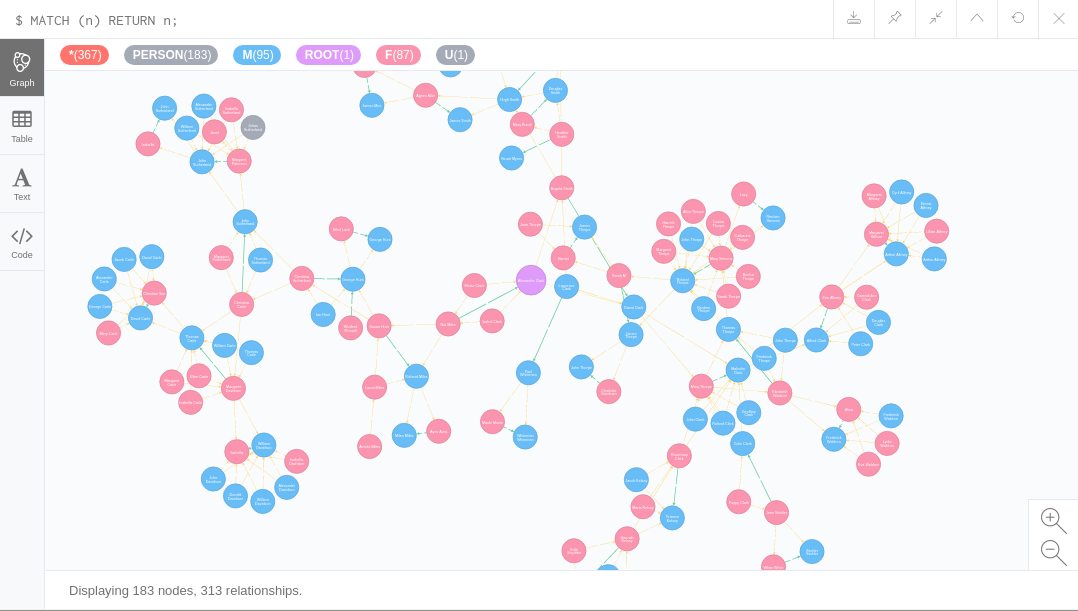 OK, that’s silly and doesn’t tell us anything.

How about the path between the youngest person and the oldest person in the tree? (These are in queries.cyp) 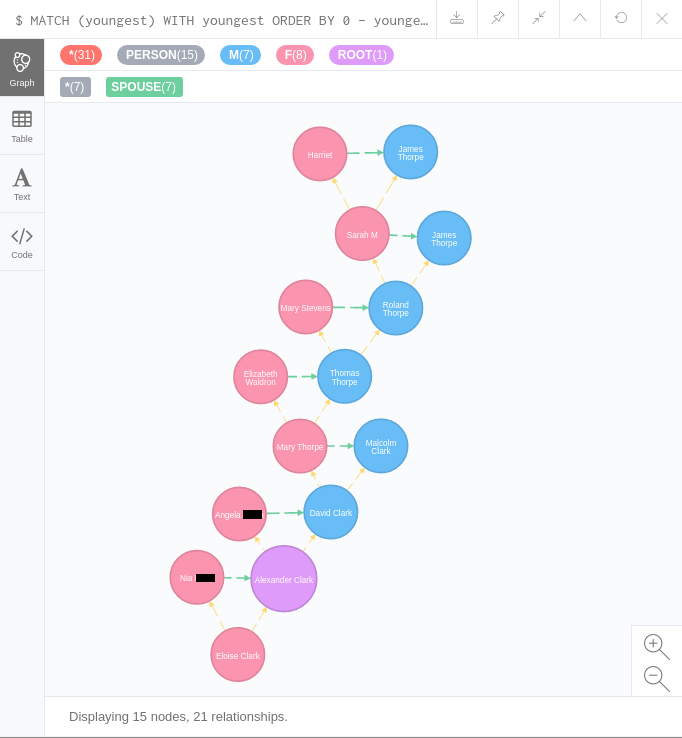 At the bottom of the image, my daughter Eloise was born in 2011.

There’s quite a lot going on in this query. I’ll break some of it down:

In cypher (the language for querying Neo4J) you get data out by using the MATCH...RETURN query. We start with

There are ORDER BY and WHERE clauses to re-order and filter our query. The label you specify can also filter the results. You can use F as a label to get all the females for example.

Cypher works like a pipeline of data. You start with a lot of records at the start and then filter or group it, passing it onto the next stage of the pipeline with the WITH clause, after which you can run more MATCHing and filtering / grouping.

Graphs work by pattern matching an input against one or more nodes and relationships. You can give it a pattern and ask it to find that pattern in the graph.

In the above example, I’ve used the shortestPath function to tell me the quickest way to get from one node to another in the graph.

Nodes and relationships between nodes are represented in ASCII:

shortestPath() takes this relationship pattern, looks for all occurrences of it in the graph, and the returns the one which has the fewest hops form the start to the end.

How about your most distant relative? 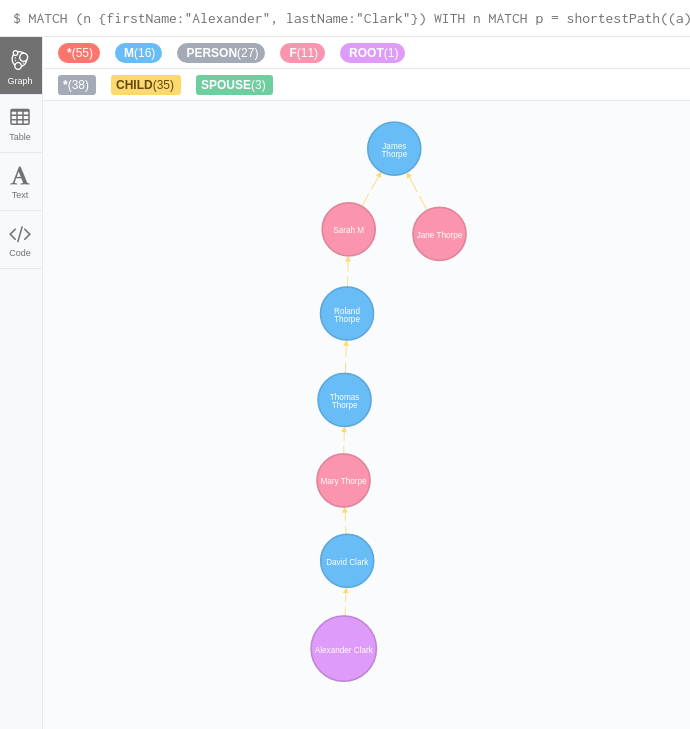 (Your mileage with this one may vary. You’ll need to change the name for your tree, and change the 8, increasing it until you don’t get a match. There’s probably a better way of finding the longestPath, but this seemed reasonably clear)

I’ve used a shorthand in the query of putting the properties I’m filtering by into the MATCH clause, rather than use a WHERE clause.

So Jane Thorpe at the top is my most distant relative that I know about at the moment.

Most popular first names in your tree? 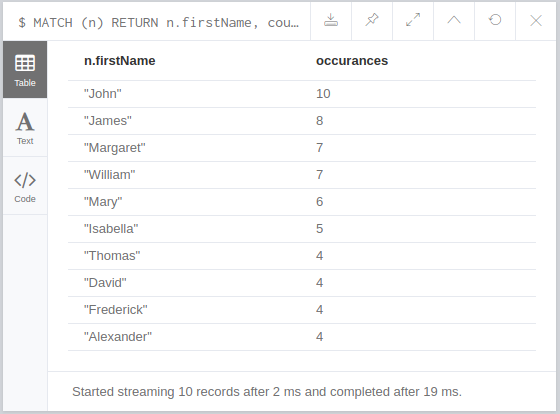 Here, data comes back as a table rather than nodes as I asked for a count aggregate and just the firstName property.

John is fairly predictably the most common, but there’s an Isabella in the list which is similar to my daughter’s name Isobel and my name is in the top ten.

My daughter asked me how often her name appears in our tree. Simple, I thought:

That should give me all the bouncing balls with her name. 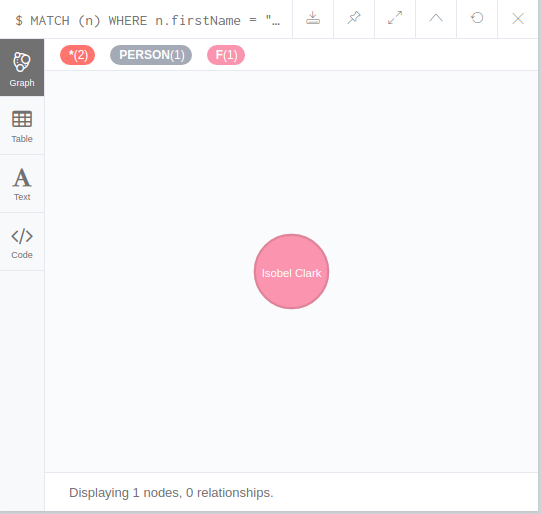 But I know there are others! Oh, they spell it differently (or it’s a variation) 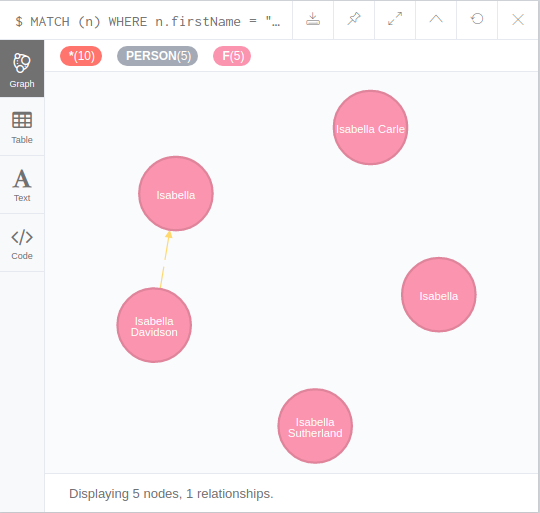 But what if I hadn’t known that or there were misspellings in my tree? Because Neo4J is built on Lucene I can do a fuzzy search:

Here, I’ve made use of a plugin of stored procedures called apoc, but dammit, still only one result!

What’s going on here? Oh. it seems that in recent releases of Lucene, to make fuzzy matching faster it’s now limited to two characters being different or missing between the two texts being compared.

OK, can’t use fuzzy matching out of the box. Google search… Ah! phoneticDelta! Let’s have a look through the list of built-in procs and see that:

OK, looks promising. Soundex is a way of quantifying how similar 2 bits of text are. Try this:

(delta here means how similar they are with a 4 being the max.)

Yay! all the nodes! But how are they related to Isobel? 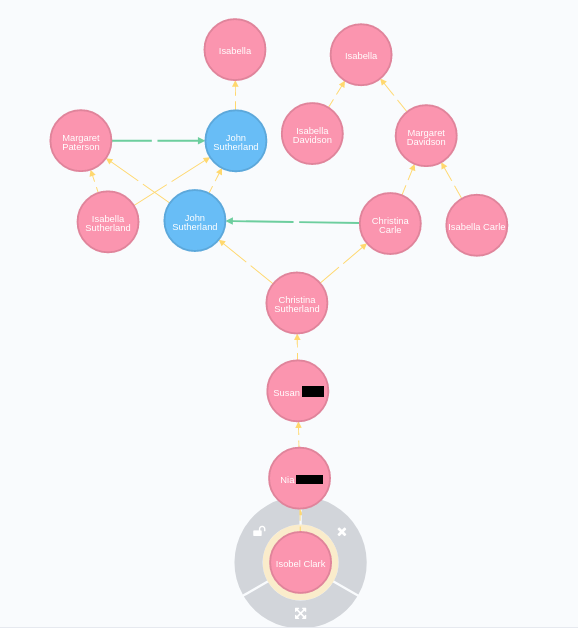 Family trees lend themselves very well to Graph Databases and Neo4J is a great tool.

There’s LOADS more to do on this. I could write a proper plugin for doing name matching better.

Or do something with the birthPlace location data to analyse how my family moved over time.

Or work this up into tool for the site to display trees.

If you want to learn more about graphs and Neo4J there are lots of googleable resources. If you got stuck, drop me a note and I’ll see what’s wrong. Or send me your gedcom and we can go through it together.