Findmypast (FMP) software engineering practises and operational practices have changed considerably over the last few years. We’ve moved from a “classic” monolithic web service, where deployments to production were applied possibly weeks after the end of a sprint, to a microservices approach where we have continuous deployment to production and the majority of the FMP service is managed by Kubernetes.

The first blog post detailed the start of the journey, where we have started to pick apart our monolith code base and start to use microservices to deliver the FMP service. This second blog post continues the journey…

At the end of the last blog post, we had an infrastructure that used Consul as a service registry and NGINX acting as a reverse proxy into our docker containers. For a while, everything was fine, but as more microservices came online we started to see more and more failures with deployments. These failures were generally due to infrastructure issues.

These were dark days, with the team spending a lot of time fire-fighting issues with the deployments. We had a whole host of symptoms, including:

The root of all the problems was consul templating. It (apparently) couldn’t cope with the amount of changes within Consul itself. It either crashed out when generating the NGINX template (which it did frequently) or simply got slower and slower. Monitoring of consul template showed a large amount of messages being received. The end result was that NGINX configuration was invalid, which then caused the routing issues. NGINX as a central routing point was a single point of failure. In those dark days, most of the teams’ time was spent investigating consul template (and restarting consul template).

We had to find a quick solution and a number of options were discussed:

The solution the finally settled on wasn’t universally loved, but it had the benefit of being a quick win, easy (in relation to the other options) to implement and had minimal impact on existing microservices. Here’s what we ended up with: 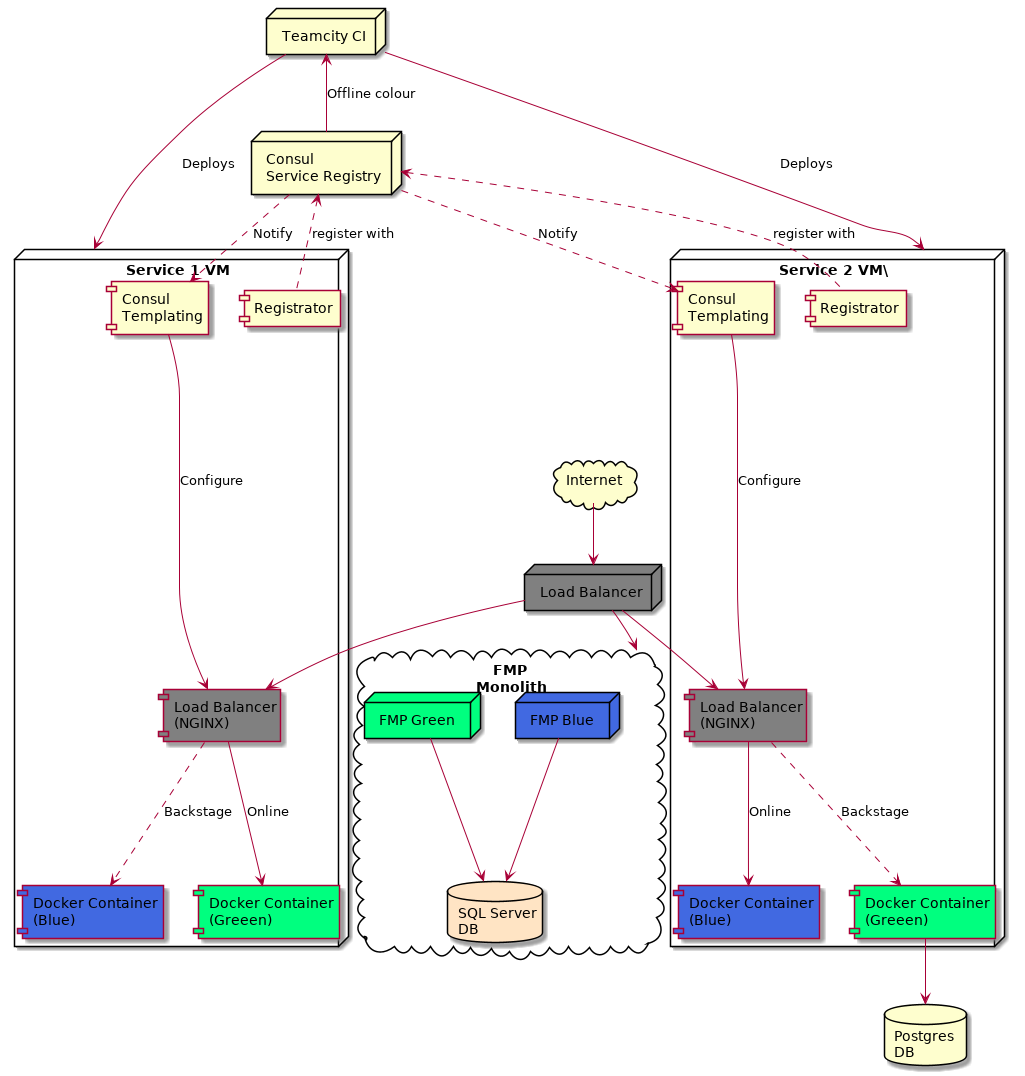 A major change - which isn’t obvious from the diagram - concerns service to service routing. How does a service call another service and route to the correct load balancer (which are now hosted on a range of VMs)? The approach here was to use Consul Service Registry as a DNS server. Recall that Consul will hold all information about all the docker containers registered on the VMs, including the new NGINX load balancer containers. A URL such as production.service1.consul.service would resolve using Consul (via round robin) to one of the VMs running the service service1. The downside was that we needed to expose those load balancers on a specific port on the VM - we choose that to be port 3333. Services could interact with our services using a a url in the format {environment}.{service-name}.consul.service:3333. The hard coded port, in particular, really upset a few people in the team. It’s not service discovery, they would cry. However, it was a necessary evil in order to get the solution in place with very little pain.

The diagram also doesn’t make it clear the redundancy built into moving the load balancer down into the VM. Each service had at least 3 VMs associated with it:

A service URL was resolved using the Consul as the DNS service. In the above example, we have three VMs, with a load balancer exposed on port 3333 and IPs of 172.21.54.1, 172.21.54.2 and 172.21.54.3. Consul DNS will round robin through those (healthy) IPs. Should one of the nodes fail, or the load balancer health checks fail, then the IP is removed from the healthy upstream list and Consul won’t return that IP back from the DNS request.

From a microservice point of view, the changes required to make this happen were minimal:

The latter was made easier by the automated tools we had already developed in house to scaffold up services and automate the CI build pipeline.

Towards the end of 2017, all microservices were updated with those changes, everything settled down and deployments were no longer failing. :grin:

With the deployment stabilised, we could turn our attention elsewhere. Hmmmm….what’s that shining over there in the distance? Could it be the fabled container orchestration tools Kubernetes? Why Sir! I do believe it is! Part 3 of the journey is about to begin!